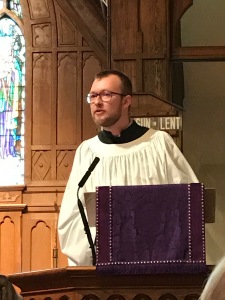 I preached this sermon at St. John’s Episcopal Church, Decatur, Alabama where I am doing my field education. I am blessed in having the opportunity to spend time with and learn from them every week. I am especially grateful for them recording my sermon which can be found by clicking here.

It’s fitting that Nicodemus comes to Jesus by night. The image of darkness creates a mysterious atmosphere, especially in our Lenten setting, one that hints at a time of uncertainty, a search for meaning, and further discernment.

Nicodemus came to see Jesus for a reason. Maybe because Jesus recently took the Passover festivities by surprise, angrily driving out the moneychangers from the temple with a whip and performing miracles.

Nicodemus says, “Rabbi, we know that you are a teacher who has come from God; for no one can do these signs that you do apart from the presence of God.”

Jesus responds, “Very truly, I tell you, no one can see the kingdom of God without being born from above.”

That kind of language is familiar to us; we’ve heard it all our lives. There’s a type of American revivalistic Christianity that attaches itself staunchly to this image as a way to describe the personal commitment of the believer. You have to be born again.

For many Christians, this statement implies a kind of conscious choice. “Are you saved?” is a question that implies that any Christian could make that decision for themselves.

But to Nicodemus it just sounds like a bad joke.

“Very truly, I tell you, no one can see the kingdom of God without being born from above.”

As Nicodemus becomes overly involved pondering the physical implications of Jesus’ statement (“one cannot enter a second time his mother’s womb”) Jesus begins to reassure him.

“Do not be astonished that I said to you, ‘You must be born from above.’ The wind blows where it chooses, and you hear the sound of it, but you do not know where it comes from or where it goes. So it is with everyone who is born of the Spirit.”

All of the sudden Nicodemus’ whole theological worldview has been completely upended, his spiritual world shaken.

To be born “from above” or of the “Spirit”…It’s not tangible.

It’s elusive—think of the wind in the trees.

You can’t see a gust of air, you know it only by the results of its presence. So it is with being born from the Spirit. You can’t see the Spirit itself, but if you pay attention you can see evidence of its work over time.

Jesus helps us identify the Spirit, not by giving us a strait-forward glimpse of it, but by offering an invitation for us to discern how it is at work in our lives.

Often, unless we pay really close attention, we don’t notice changes in ourselves or in the world around us until we look back and find the evidence.

We don’t see those changes occurring in ourselves each day, we only notice them when we reach for a photo album.

“Did my stomach really used to be that flat?!”

God’s creation might be evaporating right in front of our eyes. Our bodies might be subtly changing everyday. But we don’t recognize the change until we take time to look for the evidence.

Jesus invites us to see an unexpected perspective.

During this season of self-denial and repentance we are called to accept Jesus’s invitation to discern the work of the Holy Spirit in our own lives.

We are called to examine ourselves and our lives so that we too might recognize the moments of grace that open our eyes to Jesus—God’s saving gift to us—sent not to condemn us but to reveal in our likeness the promise of new birth.

It’s time to take stock of that grace.

Some people are really good at it, including my friend Pam. Each time I hear from her she tells me about how God has been working in her life.

She tells me about her deliverance from health struggles. She talks to me about her daughter’s new job. It really is a spiritual gift I think, to be able to recognize God at work in your life like that.

Everyone should be so lucky as to have the ability to reflect in that way.

Nicodemus first visited Jesus because he was curious about Jesus’ teachings, and his spiritual outlook ended up drastically changing from a set of well-organized beliefs once he learned about this mysterious birth by the “Spirit.”

But it didn’t stop there.

He appears again a few months later (in chapter seven of John’s gospel) during the Jewish Festival of Booths.

The chief priests and pharisees are plotting to arrest Jesus, and as they argue with the temple police about the best method for doing so, Nicodemus speaks in Jesus’ defense.

“Our law does not judge people without first giving them a hearing to find out what they are doing, does it?”

He stands up for Jesus.

Give the man a fair hearing. It’s our custom. He at least deserves that.

And then several months later we meet Nicodemus again.

He accompanies Joseph of Arimathea to embalm Jesus’s body after it has been taken off the cross.

The scripture says, “Nicodemus came, bringing a mixture of myrrh and aloes, weighing about a hundred pounds. They took the body of Jesus and wrapped it with the spices in linen cloths, according to the burial custom of the Jews.”

He arrives to tend to the limp and broken body of the Lord.

Give the man a proper burial. It’s our custom. He at least deserves that.

Is this the same skeptical pharisee that appeared in the middle of the night? It would seem that his first visit to Jesus had quite an affect—a lot’s happened to Nicodemus since then.

I wonder if, the day Nicodemus laid Jesus in the tomb, he thought back on that first time he met with him.

I wonder if he’d recognize himself?

I wonder if he’d recognize the Spirit’s work in his life.

I wonder if, as he laid Jesus in the tomb that day, he’d hear the wind rustle the treetops and think of a birth, his birth, from above.